We’ve did a follow up interview with an amazing talented singer and songwriter Sarina Haggarty.

Sarina Haggarty is an inspirational figure for many. With the wide amount of support and fans, Sarina has performed in sold out venues in her hometown such as London Music Hall and Aeolian Hall. Successfully selling out London Ontario’s top venues, Sarina has released two EP’s. “Missing Pieces” in 2016 and her sophomore EP “Compass” in 2018. Sarina’s music branches out into every genre possible. She has had encounters with artists such as Sarah Smith, Edward Sharpe & the Magnetic Zeros, Lennon & Maisy Stella, Kim Churchill, George Fox, Tim Hicks, Tyler Shaw, Shawn Mendes and Mark Schulman.

As Sarina was a Make-A-Wish patient, and had the opportunity to perform an original song at Quicken Loans Arena during a sold out Shawn Mendes concert in Cleveland. Her wish became an aspiration worldwide and as Make-A-Wish celebrates their 40th anniversary, a PSA was released with John Cena speaking and featured her angelic voice throughout the video recorded in LA. Read more here:

Lisa: How did it all start for you in the world of music?

Sarina: I grew up in a very musical family and self-taught myself all sorts of instruments at age 3-5 such as cello, guitar and piano. I was always in an out-going environment with family and friends. I started singing old songs, new trendy songs and many music theatre songs. Eventually, I took lessons and I got more inspired. I started writing and performing every place I could. In 2016, I released my first EP called “Missing Pieces” and sold-out Aeolian Hall in London, Ontario. Since then, I have been a full time performer and I am continually releasing new work.

Lisa: What types of change do you feel your music can initiate? (is this a correct answer?)

Sarina: I believe my music can stand out to many listeners. Most of the time, it may be thanks to the relatable lyrics and memorizing melodies but also the narrative stories that are in the song. When people listen, I just want them to enjoy it and be fascinated.

Lisa: You’ve just released single an amazing new single “Take It All Back”. I’ve had a chance to listen to it and I loved it. What’s the story behind this song?

Sarina: Thank you very much, much appreciated! Yes, Take It All Back will be out everywhere and I am excited to share this one. I’m proud of how it turned out and I enjoyed working on it, even though it involved hours just sitting in my room during the lockdown.

Earlier this year, I booked a virtual writing session on Zoom with a producer and artist who is currently based in New York, Dylan Emmet. As soon as we started writing, we came up with the upbeat melodies and lyrics that added up to a story and feeling that anyone can relate to. I have a habit of writing sad, heartbreak songs about boys but this one at least had a different perspective to it. It was written from the point of view of a person who wasn’t experiencing heartbreak and wanted to be friends with someone, instead of breaking their heart and ending the whole relationship.

I think it’s easy to relate to it, to a few lines, or know someone who can clearly relate to the feeling. When Dylan Emmet and I started writing, we had the same perspective of what to write. He also is one of the coolest pop songwriters I’ve worked with by far.

Lisa: How did you document the music while it was being formulated? (do you mean all my music im working on now?)

Sarina: When finishing a song or writing just a verse, I make sure I have it saved and I just record rough demos. Pretty simple!

Sarina: Instead of being in-studio for hours, it felt way different. We wrote and worked on a song throughout a few zoom calls. I live in a loud and busy house but managed to find quiet time to record the vocals. Then, I sent them to Dylan and we added it to the session he had on Ableton. I think we only had 3-4 sessions and then sent the song to Robert Nation, who mixed it in EMAC Recording Studios.

Sarina: To me, the most important thing in live performance is engaging your audience. It’s good to be social and show off your personality because the audience will sink that in, be captivated and remember your performance even more.

Lisa: What non-musical entities and ideas have impacted your music? (I think I understand and answered this correctly?)

Sarina: People and life-experiences have impacted my music creation and career. However, I love listening and learning about other stories that I have not experienced, and still getting a view of their experiences in life.

Sarina: When it comes to creativity, my advice would be to concentrate and try to have a good state of mind when writing, working, learning, or whatever you may be doing. For me, it’s been extremely hard to stay focused and inspired during this pandemic. It’s definitely affected my music skills but doing co-writes has motivated me more than ever. Recently, I realized that time doesn’t matter in most cases. Even if you have goals or deadlines, you shouldn’t feel like you’re in a rush and you shouldn’t have to worry how long it takes you to get something done. You also should not compare yourself. At the end of the day, my advice would just be patient with yourself and be open-minded!

Sarina: I am not a pro with technology in music or in general. I know enough about what I currently need to know; when it comes to plugging-in stuff and make the sound work – haha. I went to Fanshawe College’s Music Industry Arts program so I did learn so much from the profs and studio time provided. I am still learning every day, especially from working in-studio and continually performing.

Lisa: What can we expect from your third EP?

Sarina: For my next EP, I’m aiming for a pop-alt vibe and I want to make it my own sound, but also steal some ambiance from other artists that I have been listening to this past year. Some of these include writers such as Holly Humberstone, Gracie Abrams, Maisie Peters and JP Saxe. I have been working with different producers and I am now deciding which songs I want to release next!

Sarina: I want to continuously improve as an artist and songwriter. My goal is to get back to performing and sharing my new music. I can’t wait to travel and meet new people in the music business now that things are opening and slowly feeling normal again. At the end of the day, I am just wingin’ it and taking chances! 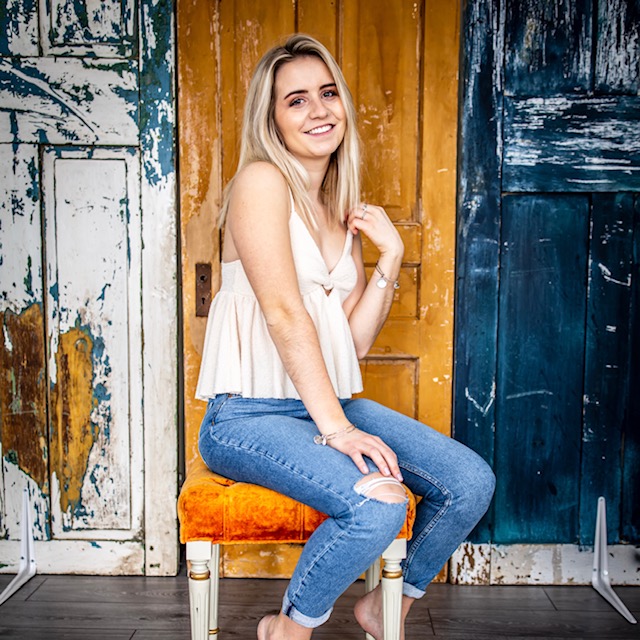