Nickolas Benson is a Rock Pop Country Blues Singer/Songwriter Recording Artist, and Producer. He is a member of the SAG-AFTRA Actor’s Union and a U.S. Military Veteran.

Nickolas Benson released 3 songs, on SoundCloud, from his #DESERTDOGS LP, his story of becoming a singer/songwriter at war.

I learned guitar and wrote a double LP while I was stationed in the Persian Gulf. A DESERT DOGS feature film is also in the works.

When Nickolas Benson’s trucking unit was deployed to the Persian Gulf, for the second Iraq war, no one could have imagined what the length of their stay would be, and no one’s life was more changed than Nickolas. The 740th deployed in February 2003, to Fort Carson, Colorado, made it to the Middle East in April, and logged well over 2 million miles, trucking equipment and supplies throughout Iraq and Kuwait. They returned home to South Dakota with a massive welcome home parade on August 1, 2004. After their 18 month tour of duty, every member of the 740th came home.

Camp Navistar, Kuwait, one mile from the Iraq border, is where Nickolas’ unit were tasked with 20 truck convoy missions into Iraq. A separate trucking unit brought loads up through Kuwait and drop their trailers for the 740th to take north. The most common missions would include, hauling to Baghdad International Airport, and military bases across Iraq.

After 8 months in country, around Christmas 2003, Nickolas realized something he had to do. While his unit was working hard driving truck missions, there was still a decent amount of free time between them. Their tent city base had a small shop with acoustic guitars and now was the time for Nickolas to learn how to play, after years of fiddling around.

As a freshman in high school, Nickolas was encouraged by his band teacher, who told him he had a good ear for music. His stepfather was impressed enough, by hearing him try to play, that he bought him a proper guitar for Christmas. But that was years ago, the time was now. He bought his first acoustic guitar and began learning chords.

As 2003 came to a close, Nickolas was jamming and printing out sheet music to his favorite songs. Tenacious D’s “F**k Her Gently” was one of the first songs he learned, while he ate up the Rolling Stones’ catalog. Scores of musical influences shaped the Rock, Pop, Country, Blues sound he has today. 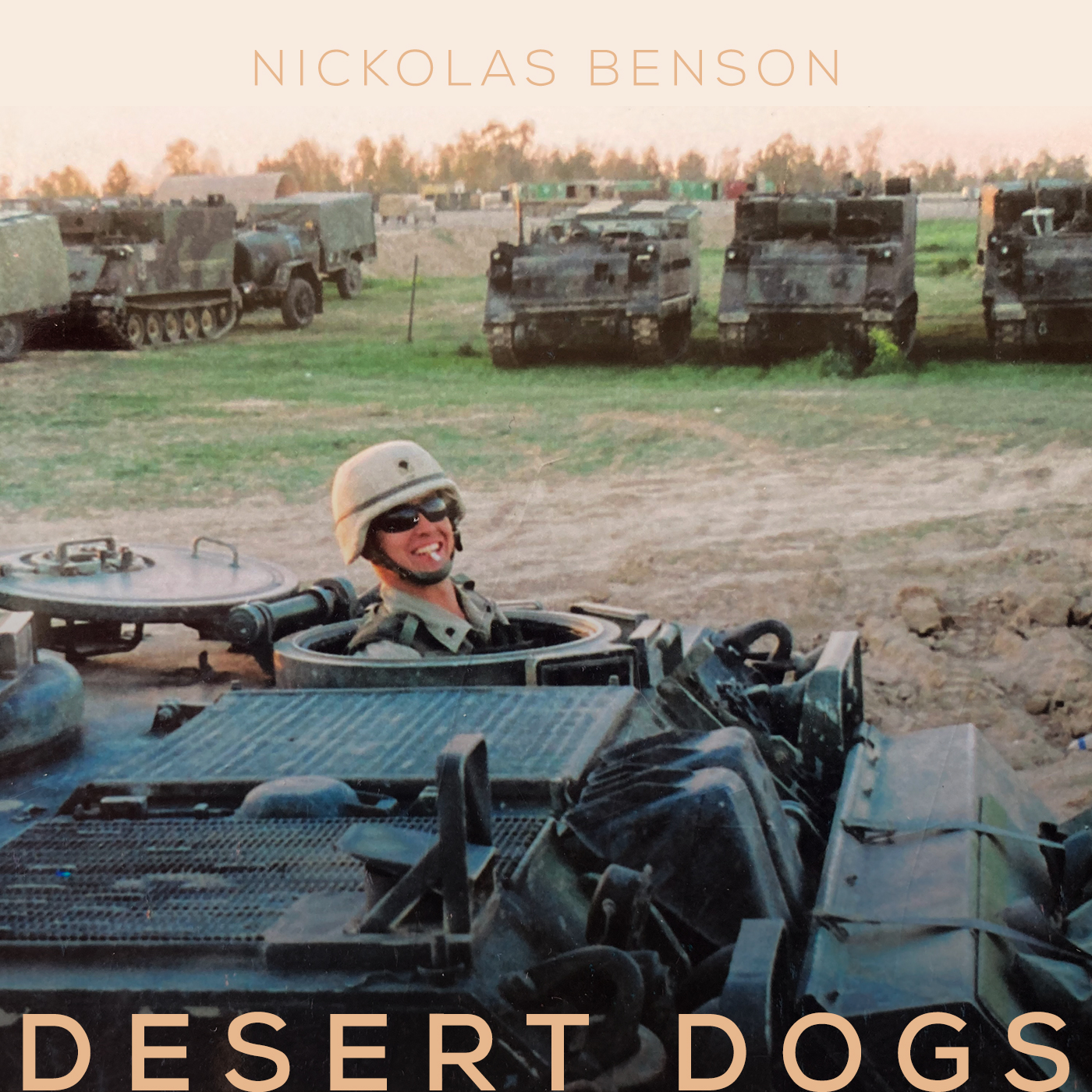 Lisa: Define the mission of Nickolas Benson. And tell me your story of becoming a singer/songwriter at war, and how you were inspired for “DESERTDOGS” LP.

Nickolas: Thanks for the interview! My mission is entertaining, as a #RockPopCountryBlues singer/songwriter, I hope to empower the human dance experience and get people moving, cause I like to move!

Glad you asked! You can read the long version of the story I published right here: https://nickolasbenson.medium.com/desert-dogs-original-music-from-an-original-story-c61a83b61f03

As the story goes, my trucking unit got deployed to war and we were in the Persian Gulf  for 18 months. After about 8 months, I bought a cheap guitar at the shop where we were stationed, near the Iraqi border. I began learning how to play my favorite songs and then writing my own. We even had a band after a while and many songs were penned with fellow veteran soldiers by the time we left the Middle East, many months later. We had written several songs and had one that was very popular, landing us in the July 4th Edition of the Stars and Stripes. We played to thousands over those last 6 months and had a great thing going. I did not, however, know what I had, and ended up recording 21 songs from my little green Army songbook, with song ideas for more. More inspiration than we could handle, luckily we all came back. I have a song called “Walk Between the Raindrops,” the latest from the DESERT DOGS LP.

Nickolas: Oh boy, well so much going on for us at war. The first release was actually the last song we wrote, some 5 days before we left, called “See You Soon.” Our band of brothers were set to meet up, back in the States, soon after we returned home. The LP goes in reverse and will end at the beginning of my songwriting there. “The Heart of What Really Matters” was written with the same battle buddy I joined the military with, as it discusses our current feelings and what we’d missed and took for granted, before we had to go to war. We were very fortunate enough to not lose any soldiers from our unit, the 740th Transportation Company, out of South Dakota. “Walk Between the Raindrops” explores that some, but mostly it’s asking “why did you send us here?” It should have a parental warning on the cover art, as it’s full of profanity. Sometimes you have to use certain colors to get your artistic expression across. The hit we had, that made the newspaper, was both popular and controversial, as we reported on the true colors, good and bad, we witnessed in our war setting. The song is titled “That’s Right, I Went There,” and became an instant classic. This is the next song to be released, no date yet. You can also find our documentary music videos on YouTube and IGTV, where I used actual video, I shot, during our deployment.

Lisa: Have you managed to make any new discoveries as the time passed during your creative process? Do you think that at some point of that process your writing approach changed much?

Nickolas: I believe your writing is always available to change, and it should over time, as you realize that it is better to be simple and avoid doing too much. You don’t always have to scream and turned up to 11. It starts with the simplicity of an acoustic guitar and the feeling of an inspired vocal, the rest is just production. You learn to get it right at the most basic, rawest form first.

Nickolas: The initiation of inspiration and love, where maybe there wasn’t enough before. My other band, THESE LOVERS, surely aims to do that, as do I.

Nickolas: I do not, however, there are only 7 chords in a key and 12 notes. You find yourself using what you already know works, but I do like to start in the key of G and change it from there. I do try to stay within the pentatonic key of the song, but it never hurts to borrow chords from another key, if it suits the song. The Beatles were genius at that.

Lisa: I love your song and video for “Song For You”? What’s the story behind it?

Nickolas: Awe thanks! It was featured on CMT and the pure Country fans really enjoyed it. The story, I believe, is that there is too much beauty in the world to think all is bad forever. We have our troubles, but we must enjoy this moment, now, regardless of what people think, and not worry about what is out of our control. We can change whatever we wish, but tomorrow, we will still be here, unless we’re not, which is still OK, cause love endures, way past the end.

Nickolas: Over time, the lyrics come to you, sometimes all at once, but you write what you can as fast as you can, making a word garden of ideas, and then go back to get what you need to do it right. Just write without worrying about lyric form, because you will stall out, just write it all out and come back when you need the right word or line to get total coverage of your song’s message or feeling. Recording this process helps a great deal, especially if you are writing music and lyrics in tandem.

Lisa: A DESERT DOGS feature film is also in the works. Could you tell us more about that?

Nickolas: A big story in need of telling, enough original music for a double LP, original music from an original story. The screenplay is complete and we are in preproduction rewrites. Searching for passionate filmmakers, who love war films, and want to help bring this story to the big screen.

Get involved and check out the full story here:

Nickolas: Growing up, I have always had a big love for the escapism of movies, that and the human condition, are of the greatest source of inspiration for me. The television has great stuff to write about and use, if you just sit and listen, and have a guitar to play.

Nickolas: Don’t believe them when they tell you you’re number one, or when they say you’re not. Most importantly, believe in yourself, keep it short, but tell a story. We humans are suckers for stories. Stay underground as long as you can and make music for yourself first, it’s about your journey. If you love it, others will too, and there’s no such thing as selling out, because the goal is to reach as many people as possible, however, the radio is not the music business, just the advertising business.

Nickolas: Both good and bad, it has been great for me, as I can do more with less. But the amount of music and video content has vastly increased, making it harder for some of the truly talented to get noticed. However, I can’t say that technology in music is bad, because people should be able to easily express themselves musically. As always, the devil is in the details, like what do you do with that talent? 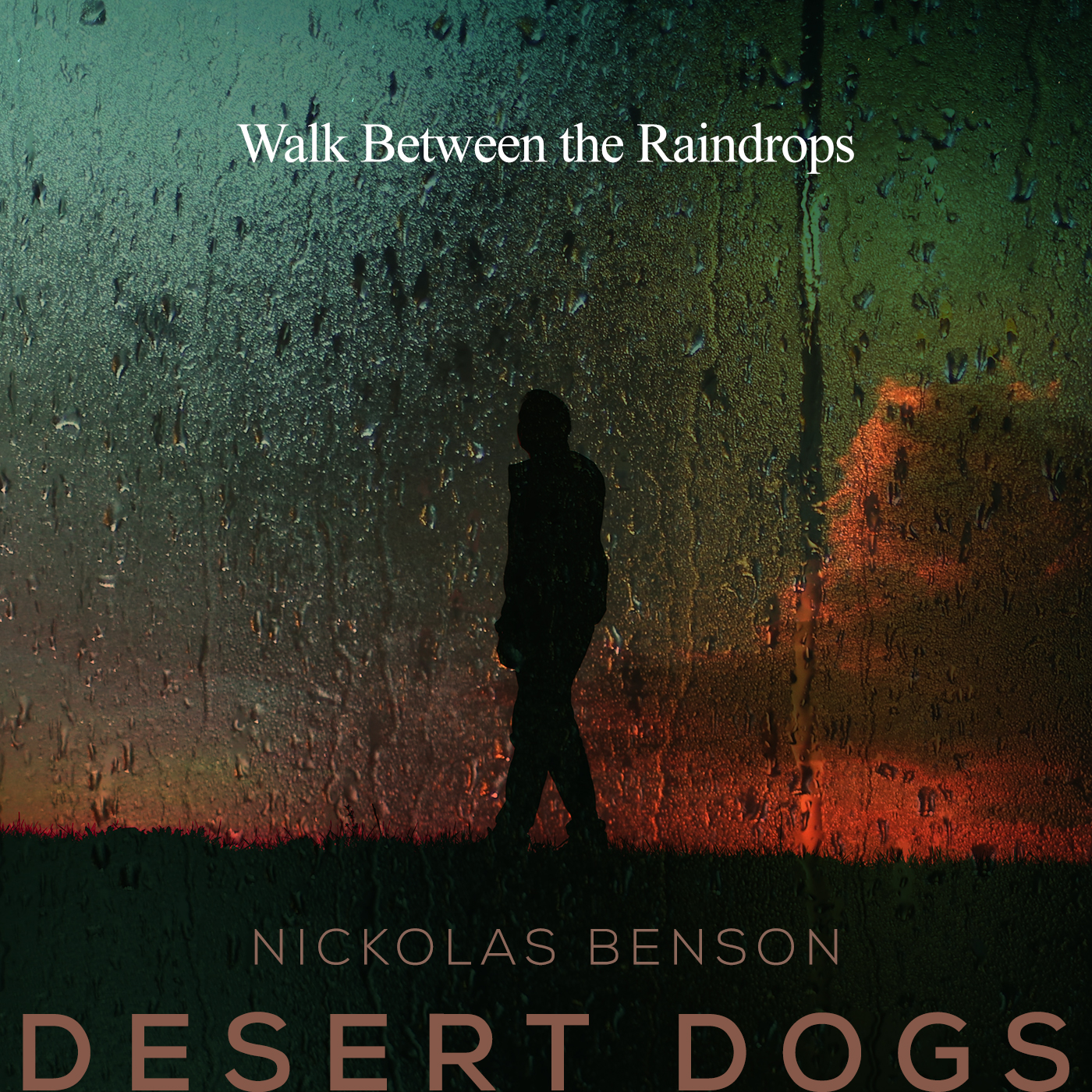 Nickolas: Interesting you should ask, because I got a head spinner for ya! Other than to keep producing demos from the DESERT DOGS LP and making a feature film, I am now fully engaged in writing and producing a true crime documentary about an ax murderer who killed his whole family of 6 with said ax. Wild, I know! The kicker? my grandmother was the sole survivor, less than a year old.

Sorry to leave you with that, but you asked!