David was born in Mesa Arizona to Mexican Immigrants. He is a first generation musician and high school student and he’s going into my senior year of high school. David is mainly a Jazz Trumpet player and his Junior year was ranked the 4th best high school trumpet player in the state of Arizona.

David originally started producing music and wrote his first song when he was 15. He is a multi versatile instrumentalist, and plays Piano, Bass, Guitar, Chromatic Accordion, Drums, Congas, and Timbales.

He started producing Dream pop when the Stay at home order was issued in Arizona in March. During this time, he made his first single “Blue” which was just a beat as a joke. He was trying out a few things on his DAW Pro Tools and I figured that this sounded really cool.

“I had a friend who told me about a distributor that could release my music on all platforms so I did that just for fun to see what it would be like. I realized that it was something that I thought was awesome so I began to produce more. I made my second single “I Miss You” a few weeks after and I released it as well.”

David is currently working on his debut album “A Dream with You”. This album will feature a wide variety of music. From Dream Pop, to 50’s 12/8Rock, to Cumbia music, to many more different styles. That will be released on July 22nd.

Lisa:Hi David! What first got you into music? What did you wanted to become when you were a child?

Ever since I was a kid I’d always see live bands on TV and I always wanted to replicate what they did. I originally got into music when I lived in Mexico. My mom had signed me up in a Government sponsored arts academy, I was there for about a year and they taught us Music Theory and Piano lessons. I didn’t own a keyboard originally so I didn’t really take it seriously, I was really just there because it was fun. When I moved back to the US in 2013 I officially started playing an instrument and that was Violin in our elementary school’s orchestra. Two years later I picked up the trumpet and till this day I’m proud to play it. When I was a child I originally wanted to become a doctor because I believed that I was going to be able to heal myself when I became sick.

Lisa: How do you describe your music to people?

I’d say that my music is a mixture of a lot of things. I’d say it gives out sort of a sentimental, psychedelic, emotional, nostalgic feel to it. My music is very passionate about love and strong feelings of affection towards a person, so I feel like that’s where that all would fit in. But I’d really abide to what people think of my music.

It honestly always depends on how I feel, emotionally. If I have what I call “The Love Blues”, I’ll immediately go to my keyboard and find harmonic sounds that somehow match the exact way that I’m feeling. When I find that, I’ll begin to write lyrics and figure out a melody that still abides to what I am feeling. Sometimes it can take me one night, a few days, or a couple of weeks to find something that I like, but I don’t stop until I find something that I like. When I eventually find that I’ll decide what I want my style to be. As in if I want it to be a Dreamy kind of song, a 3/4 Swing, and etc. Then when I get that figured out I’ll begin recording. When I write music, I always abide to what I’m feeling so that the song can come out the way that I want to hear it. My second and much shorter creative process for writing music is me just going to my keyboard whenever and trying to figure something out that I’ve never heard before, and just experiment with different sounds, styles, and chord structures.

Lisa: You are very versatile and talented instrumentalist. What is your favorite instrument, and why? And what are your biggest influences and why?

Trumpet is my all time favorite instrument. Whenever I feel emotionally good (which is surprisingly very often) I’ll just pick up my instrument after a long practice session and play some of my favorite Jazz tunes or a Blues. Such as Blues for Alice, Satin Doll, My Reverie, Milestones, and etc. I’d say I have many influences. My dad is from a little town that’s not to far from Mexico City, so growing up my parents would listen to a lot of cumbia/salsa music at family parties. Music by Los Angeles Azules, Los Angeles de Charly, Grupo Cañaveral, Yaguarú, etc. On my own when I was in my early teens I’d listen to a lot of 40s and 50s oldies/rock, such as music by Ritchie Valens, Santo and Johnny, Frankie Valli, Frankie Avalon, etc. Then my final and favorite influence is all the Jazz music that I listen to. Since I started playing trumpet I began listening to many great jazz trumpet players such as Dizzy Gillespie, Miles Davis, Lee Morgan, Clark Terry, and Clifford Brown. Those are my top 5 favorite trumpet players. Most of the music I make now comes from everything that I’ve listened to over the years. 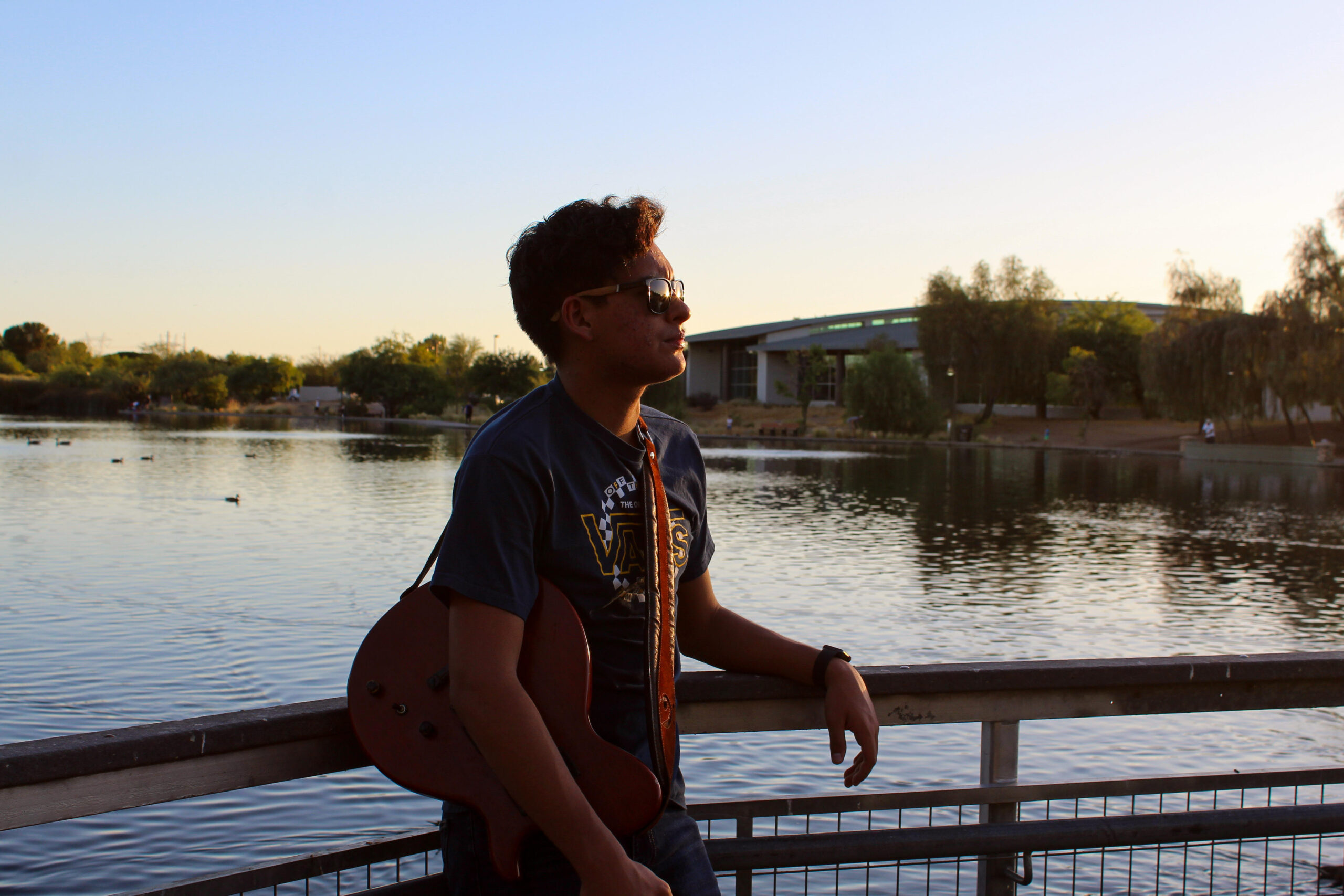 Lisa: I really liked the single “Blue”. Can you tell me more about it? What is it about, and how did you get inspired to write it?

Blue was actually the first ever song that I made during the Arizona Lockdown. It was just a test beat I made with the new DAW (Pro Tools) I started using at the time. This was a result of a way that I was feeling at the time. The lockdown was implemented and I couldn’t see anyone of my friends, I had just gotten out of a relationship, and my Junior year was cut since schools were cancelled. But I was determined that everything would get better. So somehow (Like I said previously) I managed to find sounds on my keyboard that matched those Blue feelings but with a slight dash of determination, and I made “Blue”. It’ll always have a special place in my heart because it’s the first thing I ever recorded and released.

Lisa: You say you’ve started producing Dream pop during the lockdown. Why that particular genre?

A few artists that I didn’t mention on my main influences section are ones that I wanted to save for this section. I’ve always been a fan of the music of Dreamer Boy, Clairo, Victor Internet, Omar Apollo, Cuco, and boy pablo. I started listening to this kind of music when I was 14 in 2016, I am 17 now and I turn 18 in November of 2020. I was one of the first listeners of Cuco, Clairo, and Omar Apollo in 2017. Out of all of the Genres genres, I chose that one because Indie/Dream Pop somehow really hits whenever I’m feeling emotional. All of my musical life I’ve searched for music that would match the way that I feel and I didn’t find it until I was 14, and I’m happy about that. I started producing this music because when the lockdown began I was not doing well emotionally at all. So many things were happening around me and to me and I had no one to talk to, so I decided to write music to express what I was feeling at the time. That really helped me get a lot of negative feelings off of my chest. So since this is a very important genre for me, I began making my own music in this style.

Lisa: What can we expect from your debut album “A Dream with You”? Is there going to be particular theme that connects the songs, or something else?

“A Dream with You” is basically everything I’ve written, recorded, and produced since the lockdown. It’s an album that expresses the many mixed feelings I feelings I had at the time. The order of the songs express the different stages in a relationship. For example the name of the first song is “I’m just a friend” and it’s a journey through from the beginning of a relationship till the sad, and hurtful end of it. It will have a wide variety of styles that I believe define me. Such as mainly Indie/Dream Pop, 3/4 Swing, Cumbia/Salsa, and a Piano and Vocal duet. It is something that I am working very hard for.

Right now I’d be planning my political career. Before I decided that I wanted to pursue music I always wanted to be a politician. I don’t know why but Government and Law always interested me. But then I thought about it well. I said to myself “Music is something you live and breathe, are you sure that you want to pursue something that won’t make you happy everyday?” Then I decided that I officially wanted to become a musician. But if it wasn’t for that, then right now I’d be filling out my Arizona State University application for a Masters Degree in Political Science.

The best advice I’ve been given is to never try to be a better musician than anyone, but to always try to be a better musician than I was yesterday, and to never forget where I came from and who was with me since the beginning of it all. That’s the only competition that I need. I always have and will forever abide by this, because being humble will get you places. Being cocky won’t.

I will continue to make music and release it to hopefully have my name in the music industry. That has always been one of my biggest goals. I am currently working on more music that will be released after I release my debut album on July 22nd. I want to study at the Conservatory of Recording Arts and Sciences and eventually move to LA, California to pursue my lifetime musical career, and I leave it all in the hands of God. Big things are coming! and more music coming soon as well! 😉

Thank you David, and we are looking forward to your album release.