Joseph Gerald Adolphus Cole better known by his stage name Daddy Saj is a Sierra Leonean rapper and arguably the biggest and most famous musician from Sierra Leone. He uses his music to address political corruption in Sierra Leone. His rap is a blend of hip hop and traditional goombay music. While his music is mostly in Krio, Sierra Leone’s national language, he does also performs in English. His first album ‘Corruption e do so’ struck a chord not only in Sierra Leone, but across Africa.

And now is his comeback moment and he has a lot more to bring to the table. In a few months, he’ll release some of his new hits.

One of his biggest hits is called “Corruption E Do So”  It’s a revolutionary song that brought a new revolution to Sierra Leone called: Freedom Of Speech 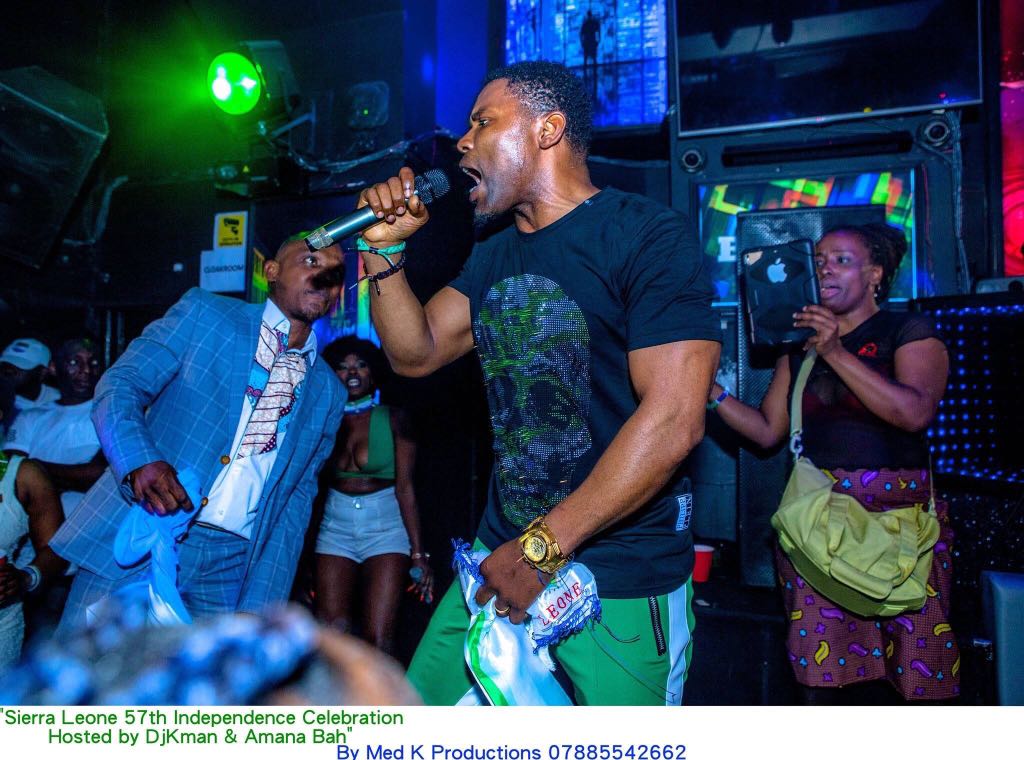 Lisa: Hello Daddy Saj, it is a pleasure to do an interview with and artist that is very well known in Sierra Leone music scene. What first got you into music? How did you get started in the music business?

Daddy Saj: Coming from a humble background, Christianity was a way of life and the only hope that the future depends on. In this regard, my parents convinced me to join the church choir at 11 years of age. Growing up in Freetown, the capital of Sierra Leone the conditions during the 80’s were chaotic, unpredictable, and war motivated. Joining the choir at 11 was a milestone I considered a breakthrough for the rest of my life.

The 11 years civil war which started in 1991 enabled a lot of changes in the direction of life in general. Unable to complete high school, I got my first job as a housekeeper at the age of 16 years. With some amount of revenue to lean on, I decided to enter the “Back Street Studio” for the first time Influenced by Ragamuffin style of music in those days with Buju Banton as one of my biggest influence. My first album was done in 1995, called Dub Wine but was never released due to the ongoing war.

Lisa: How much did the musical scene in Sierra Leone changed after your single “Corruption”? Are the other musicians following your lead with mor courage?

Daddy Saj: The song “Corruption E Do So” (2003) became the epitome of the music industry in Sierra Leone. It was described by all the experts as the Revolution for Freedom of Speech. The fear of people in power or the wealthy social class did not exist anymore. Everyone affected by injustice and poverty turned out to be part of the movement. Many youths took to speaking out through journalism, music, and comedy as a way of life to express their disappointment as corruption was the order of the day. In reference, the hit song Corruption helped frame the music industry and gave recognition, power, and financial gain to anyone referred to as a musician.

Lisa: Where is Sierra Leone now on Freedom Of Speech? Is it still an issue, and do artists still get in trouble? What are some other issues that needs to be tackled?

Daddy Saj: The status quo in Sierra Leone has become a “beggar’s mindset” it’s all about survival. Freedom of speech exists, however the wealthy and people in power take advantage by influencing the voiceless, the poor, even musicians. Money and corruption works, justice only talks without action. People in authority, dependent on the government in power, go to different lengths to shut down musicians who try to speak against corrupt activities through bribery or threat of jail time. What needs to be done in order to get the positive drive again for Sierra Leone to become corrupt-free and prosper is for sacrifice to prevail. We all have to set our minds to the price… put your country first and not your tribe, political party, or survival by any means. If we continue to accept this vicious and greed mentality “let the rich be so that the poor can live,” then we are heading for another trend of war.

Lisa: Tell me more about your single “It is you”. What is it about, and how did you get inspired to write it?

Daddy Saj: My upbringing and religious background represents the best of me. As a born again Christian, I surround myself with things that align with the word of God. In spite of my sense of activism, I always add a gospel song to each album as gratitude to my King for his grace over my life. The song “It is you” is part of my third album “Che Che” (2004) produced in London, MO Studios. It is you imply: if it wasn’t for you Lord, it would have been impossible.

Lisa: Describe your approach to writing a song.

Daddy Saj: Song composition for me I consider as spiritual. I don’t just write music thinking I am talented enough to do it all by myself but mostly ask for Christ Intervention via praying and living right. I have books with jottings entailed with parables, nuance, rhymes, cultural virtues, traditional rights and concepts to always look into in order to guide my language and composition. In addition, I love to read books, watch world documentary videos, and learn different languages both local and international. From this I am able to increase my intellect and word vocabulary.

Lisa: What types of state in emotional sense do you feel your music can initiate?

Daddy Saj: I affiliate myself to mostly positive lyrics or conscious vibes. The emotional relativity can be described as giving hope to those in despair and powerlessness. In order words, my music inspires revolution for positive change, hopeful, and to be grateful for life.

Daddy Saj: In reality, I can proudly say nothing. There was never a day to imagine prosperity; poverty was the norm for me and the only influence available.

Lisa: What is your view on technology in music? And where do you think music industry is going?

Daddy Saj: Technology is the new order as traditional music has become less prevalent in our generation. Technology makes life in every aspect easy to accomplish. Traditional method of recording in this era is still dependent on technology to reach maximum output. The Sierra Leone music industry is heading to a place of world recognition. So much talent, untapped sounds and style of music. One thing to make it all possible is to have a structured industry with financial input.

Lisa: Are you planning to collaborate with any other artist?

Daddy Saj: Absolutely yes… I am looking forward to not only collabo with local artists from Sierra Leone but to have songs with internationally recognized musicians all around the globe.

Lisa: What’s next on the horizon for Daddy Saj? What themes are going to dominate your new material?

Daddy Saj: Daddy Saj is presently the next big thing in Sierra Leone. I have been away for over 10 years and now am back again to rule like before. This means a lot as the new world era has transformed to a digital age of music, promotion, and marketing. I am hopeful that with the help of my team and few connections, despite being a lyricist, I can take Sierra Leone to the next level of entertainment worldwide. Definitely, my type of music should be able to dominate West Africa for a start and then move up to Western platform with Radio/TV plays and live performances.